It’s Easter!  Aren’t we finished with the tomb of Jesus by the time we get to Easter Sunday?  Can’t we leave behind the gory events in Jesus’s last days, and focus on the resurrection now?  This Easter, I am suggesting that we follow the example of Mary Magdalene who stayed at the empty tomb that day.  Because she took time at the tomb, Mary Magdalene experienced the power of God in ways the other disciples missed.  Let’s take some time today to linger at the empty tomb so that we, too, can discover what Mary Magdalene discovered.

END_OF_DOCUMENT_TOKEN_TO_BE_REPLACED

If Jesus’ entry into Jerusalem was triumphal on Palm Sunday, what went wrong less than a week later?  Why did the crowds who adored Jesus on Sunday, turn on him by Friday of that week?  And what choice does Palm Sunday present to us today?  In this sermon, I’ll try to answer those questions and explore the reasons the Roman empire, the Jewish religious leaders, and the common people all turn on Jesus after that glorious Sunday.

END_OF_DOCUMENT_TOKEN_TO_BE_REPLACED

When Jesus taught his disciples The Lord’s Prayer, he included what might seem like a strange phrase — “And lead us not into temptation, but deliver us from evil.”  Does God tempt us to do wrong?  If not, why should we pray this part of the Model Prayer?  Tomorrow as I preach this sermon, I will be answering those and other questions about this puzzling part of the prayer Jesus taught us to pray.

END_OF_DOCUMENT_TOKEN_TO_BE_REPLACED 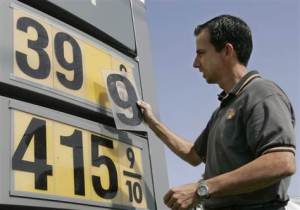 It is obvious that gas prices are rising quickly again.  In 2007-8, I wrote several posts on the prospects of gasoline hitting $4-$5  per gallon – you can read those posts here, here, and here.  We were well on the way to those numbers in the United States, and then the bottom fell out of the economy on a global scale.  Gas prices fell quickly back to under $2 per gallon.

Now the trend is in the opposite direction again.  There is no gas shortage — we actually export gas and other petroleum products to other countries.  We have a surplus of gas in the United States, and yet gas prices are rising again.  I am not an economist or an energy expert, so I’ll skip the explanations for all of this, but the truth is, gas is going up again.

While I thought the impact on churches three years ago was going to be significant, I now believe the impact on churches may be catastrophic.  Here’s why I think this time the situation is worse.  In 2007-8, as gas prices rose driven by the futures market, the US and global economies were growing and stable.  The subprime mortgage securities crisis had not yet hit, despite rumblings from some investors and economists.  Employment was high, unemployment was low, jobs were being created, and the prospects for the future looked bright.  So what if gas hit $4, we’d just suck it up and keep going in our SUVs.

Of course, things were much worse than anyone imagined.  To prevent a global depression, Wall Street had to be bailed out, along with the world’s largest banks and financial insurers like AIG.  Add to that 2 of 3 US auto manufacturers, and you have  a recipe for difficult days financially.

What does this have to do with churches?  The rise of fuel prices will drive increases in the costs of other consumer goods and services.  With unemployment at 8.8% — although some economists estimate the “real” unemployment rate at close to 15% — more Americans are out of work, not counting the ones who are under-employed, or employed on a part-time basis.

There is no doubt the federal government is going to reduce spending beginning now, which will lead to the termination of many government programs, and further unemployment.  Fewer services will be provided by government in the near future, including (if Paul Ryan has his way) major overhauls of Medicare (medical care for the elderly), and Medicaid (medical care for the poor).  The Federal Reserve is also making noises about raising interest rates due to fears of inflation fueled by rising prices.

All of this will have the following impact on churches:

What point am I trying to make?  Get ready.  Begin now to prioritize your church budget.  Decide what your church is really going to be about.  Prepare mock budgets based on different scenarios which emphasize different ministry priorities.

I believe that we will see single cause churches, much like we have single cause non-profits.  There will be churches that focus on senior adults, or single parent families, or families with special needs children.  Why?  Because smaller churches especially will be unable to “be all things to all people.”

We are on the front end of this economic realignment.  Churches, I believe, have an obligation theologically to make the tough choices to minister to the most vulnerable in society, even if the popular political position is the opposite.  We will soon face those choices, and because we are approaching another presidential election cycle, do not expect solutions from either major political party until at least 2013.  What do you think?  Will rising gas prices and other factors impact churches? Why or why not?

Did Jesus really mean that God would not forgive us unless we forgive others?  And, if so, what does this do to the idea that salvation is by grace through faith, not by works?  Join me as we look at this passage from The Lord’s Prayer today.

When You Pray:  Forgive and Be Forgiven

12 And forgive us our debts,

as we also have forgiven our debtors.

END_OF_DOCUMENT_TOKEN_TO_BE_REPLACED

Terry Jones has blood on his hands today.  Jones is pastor of the Dove World Outreach Center in Gainesville, Florida, where the Quran was burned after being “tried” by Jones and his church in a mock court.  The Quran was found “guilty” and, after being soaked in kerosene, was burned.  News of the event trickled out in the media, and went little noticed by the Western press.

But it did not go unnoticed in the Muslim world.  Today an Afghan mob, angered by news of the burning of the Quran at Jones’s church, attacked a United Nations office in Afghanistan today killing as many as 20 UN workers, and setting fire to buildings in the UN compound.

Terry Jones was warned this would happen when he held the world’s attention last year as he threatened to burn the Quran on 9/11.  Jones sowed the wind and the world is reaping the whirlwind.

But, of course, Jones is unapologetic.  The LA Times reported, “In an email statement released Friday, Jones did not say why he changed his mind yet again. He condemned the violence in Afghanistan, calling it “a very tragic and criminal action,” and called on the U.S. government and United Nations to “call these people to justice.”

Jones, of course, takes no responsibility for these deaths, and for the unrest his actions have provoked.

Buddy and I are watching the Braves.
Church youth Valentine’s banquet in 1966. Look how skinny we were! We’re still crazy in love, just chubbier. Happy Valentine’s Day, Debbie!
This is my 99 yr old father teaching his Sunday School class this morning. The class brought a party to the assisted living facility to celebrate his 99th birthday. My stepmother, Lola, was 85 last Monday and Dad was 99 yesterday. He’s pretty amazing!
One car out today, thanks to Wayne Haskins! The old van will have to wait for warmer weather.
Our nativity scene that my parents brought us from The Holy Land 40 years ago. I love it’s simplicity and the warmth of the olive wood.
Snowing in Chatham, VA today. Probably 8-10” and it’s 12 noon. Supposed to do this all day! #snow #snowedin #sameaslastyear

Buddy and I are watching the Braves.
Church youth Valentine’s banquet in 1966. Look how skinny we were! We’re still crazy in love, just chubbier. Happy Valentine’s Day, Debbie!
This is my 99 yr old father teaching his Sunday School class this morning. The class brought a party to the assisted living facility to celebrate his 99th birthday. My stepmother, Lola, was 85 last Monday and Dad was 99 yesterday. He’s pretty amazing!
One car out today, thanks to Wayne Haskins! The old van will have to wait for warmer weather.
Our nativity scene that my parents brought us from The Holy Land 40 years ago. I love it’s simplicity and the warmth of the olive wood.
Snowing in Chatham, VA today. Probably 8-10” and it’s 12 noon. Supposed to do this all day! #snow #snowedin #sameaslastyear
%d bloggers like this: