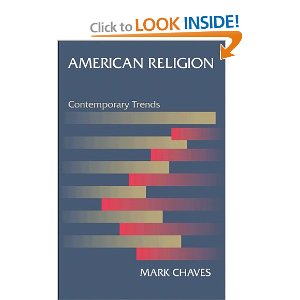 In the chapter titled simply “Congregations,” Chaves examines sociological and demographic trends which are shaping church congregations. These six trends are:

Loosening denominational ties.  Of the 300,000-or-so congregations in the United States today, 1 out of 5 is an independent church, not affiliated with any religious denomination.  And, although this may seem apparent, a full 20% of all Protestants (which includes everybody not Catholic, Jewish, Muslim, etc) attend an independent church.  In addition, in the churches which are affiliated, funds sent by the churches to denominational headquarters have fallen from 5% of church receipts in 1998, to 4% of receipts by 2006.  While some churches may have stopped or redirected giving to their denomination in protest of unpopular actions, Chaves believes the drop in sharing reflects the “rising costs of running a local congregation.”  My own church reflects this trend as we have shifted the allocation of funds in recent years more to our own local missions efforts and less to our denomination’s.

Greater use of technology.  This trend, unlike some of the others, is obvious and observable, but Chaves provides specific percentages of churches employing digital technology.  For instance, 74% of churches now have websites, and 79% of congregations now communicate with their members via email.  But only 32% are using visual projection in worship.  I thought the use of projection in worship was higher than that, but obviously some changes come more slowly than others.  What we are quick to embrace in our personal lives, we might not embrace so readily in our corporate worship experiences.  Our own church confirms this trend.  While we maintain a church website, and use email and an online phone tree for contacting our members, we do not use projection in our traditional worship service.  In this one area, small churches might be skewing the percentages since there are more small congregations than large.

Increasing informality in worship.  Chaves notes that more churches incorporate “drums, jumping or shouting or dancing, raising hands in praise, applause, calling out amen, and visual projection equipment” in worship than before.  Even in our very traditional service, we have made a conscious effort to “loosen up,” and our members applaud as their expression of appreciation for music or other presentations.  As you might imagine, dressing more informally, especially among younger people, is also part of this trend toward informal worship, which is a part of the larger trend of dressing informally in our social and work lives as well.

Aging membership.  People in the pews are getting older, according to Chaves.  While five of the six trends mirror changes in the wider culture, this trend of an aging membership is ahead of the rest of our society.  In the 1970s, church membership was about 3 years older than society at large.  Today church attendees on average are 5 years older than the wider population.  “Only when it comes to the aging of their people are congregations on the leading edge of a demographic trend,” Chaves notes.

Increasing member education and affluence.  In addition to the increase in age, congregants also have increased in educational level, with more college-educated than before; and, in income level as well.  In my opinion, while these increases are welcomed at the local church level because they represent both enhanced levels of potential leadership and giving, the downside is that congregations as a whole may have moved away from the most marginalized of society – adults with lower incomes and educational levels.  These “working poor” formed the backbone of Methodists, Baptists, and Pentecostal denominations in the 19th and early 20th centuries.  If they are being left behind as church congregations grow in both education and affluence that would be a tragic abdication of the church’s mission in the 21st century.  In our own community, the “working poor” represent the largest unreached population among our local churches.

Increasing growth and popularity of large churches.  Two things are clear in Chaves’s research.  First, there are more small churches than large churches.  That’s the good news for small congregations.  The median size of congregations remains unchanged at less than 100.  Specific estimates range from 75-90 participating adults as the median size, which means that half of all churches are smaller, and half are larger.

But, the second fact brings discouraging news for smaller churches.  While the median congregation has less than 100 participants, the median church member attends a church of 400 participants.  In other words, well over half church participants are in churches that are much larger than the median.

However, Chaves also notes that on the whole, religious participation in America is declining.  He cautions that this trend toward “concentration (more people in bigger churches) has not increased because megachurches have figured out how to attract the ‘unchurched.’”

The implications of Chaves’s findings in this rise of larger churches is, first, the obvious one that the movement of participating church members is from smaller congregations to larger ones.  But, secondly, that movement may or may not be solely the result of the attraction of larger churches, but may also result from the shift of population from rural to urban areas.  We are, in other words, swapping members from smaller to larger, from rural to urban churches.

Chaves also notes that the rise of megachurches creates the illusion that church participation on the whole is on the rise. That is not the case, however.  Although an amazing 60% of American adults have attended a service at a congregation in the past year, only about 25% attend church on any given week, and that number is unchanged over several years.

Additionally, if you think that emerging churches, or “spiritual but not religious” are outpacing the traditional local congregation, think again.  Chaves reminds us that traditional, institutional churches remain by far the “most significant social form of American religion” in our culture.

Mark Chaves offers small churches a mixed bag of information to deal with in his book, American Religion.  Some of these trends are observable (aging members, more technology), some are welcomed (higher education and affluence levels), and some are problematic for small churches (neglect of working poor, and more members in more larger churches).  But the startling fact that should spark our imaginations in both small and large churches is Chaves’s conclusion:

“The religious trends I have documented point to a straight-forward general conclusion:  no indicator of traditional religious belief or practice is going up.” – American Religion:  Contemporary Trends, Kindle loc. 1209.

This observation should spur both large and small church leaders to a renewed sense of mission, critical self-examination, and innovative methods of outreach.  Whatever the realities of the small church versus megachurch conversation, American Christianity as a whole is falling further and further behind in reaching and impacting the people around us.  That is the most disturbing trend of all, in my estimation.

Disclaimer:  I purchased American Religion: Contemporary Trends from Amazon at my own expense, and received no inducement or other consideration to quote from, or use this book.  This article is the result of my own reading and reflection and was not suggested by the author, publisher, or publicist connected with the book. -CW