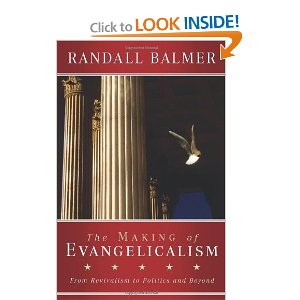 Evangelicalism has thrived in America because of its ability to adapt to its culture, according to Randall Balmer in his book, The Making of Evangelicalism: From Revivalism to Politics and Beyond.

Balmer, professor of American religious history at Columbia University and a contributing editor to Christianity Today, writes in this brief book published in 2010 by Baylor University Press, that five historic shifts have shaped evangelicalism uniquely as “America’s folk religion.”  These shifts are:

1.  The shift from state church to free church.  Balmer contends that the First Amendment, which guarantees that the government shall not establish or impede religious expression, set evangelicalism free from state influence to flourish or die on its own.  Unlike Europe where acts of toleration permitted dissenting groups to exist in the shadows of the state-sanctioned church, the First Amendment assured that American churches would be allowed to “compete” among themselves for the attention of the American public.  This freedom was not only a freedom to worship, but also a freedom to freelance the Christian faith by any person or group who chose to do so.  Balmer notes, “The genius of evangelicalism throughout American history is its malleability and the uncanny knack of evangelical leaders to speak the idiom of the culture…”

It is this freedom to change that has enabled evangelicalism to flourish and adapt to the culture around it.  However, there are dangers associated with adapting to the culture, which Balmer addresses in the book.

2.  The shift from Calvinism to Arminianism.  Balmer illustrates this important theological shift by describing the differences in the First and Second Great Awakenings in America.  The First Awakening was dominated by a sense of helplessness expressed by Jonathan Edwards in his “Sinners in the Hands of an Angry God” sermon.  Revival and salvation were God’s work, and sinners were at the mercy of God as to their eternal destiny, according to Edwards.

But by the time of the Second Awakening, preachers like Charles G. Finney believed that revival was “man’s work.”  Finney published a manual telling how others could hold revival meetings and included details about location, songs, and even the mourners’ bench.  This shift from hyper-Calvinism (“God’s work) to hyper-Arminianism (“man’s choice”) changed the ways in which the gospel was presented, and changed the focus of evangelical life.

Balmer explains the recent renaissance of Calvinism among those who believe in a person’s ability to “decide for Christ” (an Arminian belief) as an attempt to reclaim the intellectual high ground despite the shifting history of evangelicalism’s theology.

3.  The shift from postmillennialism to premillennialism.  How could one’s view of the millennial reign of Christ, a rather esoteric theological doctrine, influence the practice of evangelicals in America?  Balmer points out that the evangelicalism of the nineteenth century grappled with some of the great social issues of its day.  Evangelicals were on the forefront of the battle to outlaw slavery, clean up the effects of alcohol, create public education opportunities for poor children, and secure the right for women to vote.  Great institutions were founded to care for the sick, educate the illiterate, feed the hungry, care for the homeless, and rehabilitate the fallen.

Balmer believes that this urgency to reform society and cure its ills came from the postmillennial idea that Christ would return after a 1,000-years of peace and righteousness.  However, with the twin horrors of the Civil War and then World War I, the hope of a 1,000-years’ of righteousness brought in by human effort faded from the evangelical imagination.  Evangelicals turned their attention to the salvation of “souls,” separating spiritual souls from the harsh reality in which those souls struggled.

J. N. Darby provided the theological impetus for this shift with his doctrine called premillennial dispensationalism.  Darby’s theology explained neatly the epochs of God’s dealing with mankind.  It also freed Christians from creating the millennial kingdom because believers would be taken out of the world until Christ came to establish that kingdom himself.  One of the results of premillennialism was a disregard for creation.  This issue is still with us today.  In 2008, Richard Cizik resigned under pressure from his position at the National Association of Evangelicals.  Although not the immediate reason for his resignation, Cizik had drawn criticism for advocating care for the environment as an evangelical issue.

4.  The shift from engagement to disengagement and back again.  Facing the twin pressures of attack on their beliefs from the scientific community via Darwin’s theory of evolution, and the academic community via higher criticism of biblical texts, evangelicals sought to define themselves by enumerating an indisputable list of “fundamentals” to which they subscribed.  This differentiation between evangelicals and “liberals” in both academia and science played out in the famous Scopes “monkey trial” in the small town of Dayton, Tennessee.

Fed up with being portrayed negatively after the Scopes’ trial, evangelicals began to withdraw from the wider culture, establishing their own schools, colleges, seminaries, and other institutions to counter the encroachment of “modernism” and “liberalism” on their families and churches.   But in 1947, Carl F. H. Henry published his book, The Uneasy Conscience of Modern Fundamentalism, and a group of evangelicals founded Fuller Theological Seminary.  Both events marked the re-engagement of evangelicals with American culture.  Billy Graham’s Christianity Today became the journalistic voice for an active and thoughtful evangelicalism.

5.  The shift from the marginalized to the powerful.  Re-engagement was to take a right turn after the election of Jimmy Carter as president in 1976.  Carter, initially the darling of conservatives, soon became their whipping boy.  With the IRS threatening to revoke the tax-exempt status of the ultra-conservative Bob Jones’ University, the rise of the Religious Right began.  Denominations and churches which had begun their ministries to the lower classes and the marginalized of society, shifted to embrace the power of politics and the prestige that went with it.  Balmer sees this shift as the “capitulation” of evangelicalism.  But he believes that the Religious Right was dealt a “mortal” blow with the election of Barack Obama in 2008.  Balmer may or may not be correct about that, but what he does hope for, in his own words, is…

“…an evangelicalism for the twenty-first century that takes seriously the words of the Hebrew prophets who called for justice, an evangelicalism that honors the teachings and the example of Jesus, who asked his followers to act as peacemakers and to care for “the least of these.”  Such an evangelicalism, I am confident, would look rather different from that of recent years.”