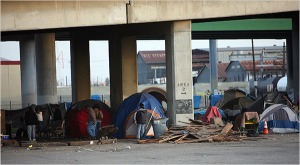 This is not a photo of a third world country.  This is the new America for some in California.  Tent cities are springing up from coast to coast as the unemployed lose their homes and apartments.

I have visited countries in Asia where whole families live in barns, or chicken coops, or cardboard boxes.  I have traveled in Mexico, and visited border towns, and tourist havens.  I rode through Mexico City where 26-million people eke out a living amid both splendor and poverty.  We expect to see grinding poverty, hunger, and homelessness in the two-thirds world.  But, in America?  In the most properous country in the world?  This is the new America for some.

Last month while at Fuller Seminary I walked the two blocks to class each day, passing two dumpsters positioned on a side street in Pasadena.  Every morning a man or woman was going through the contents of the dumpsters.  I encountered an old woman pushing two shopping carts on Colorado Boulevard, an affluent area of Pasadena filled with shops and restaurants.

At night I walked down Colorado in Pasadena for dinner.  On the way back to my room I passed several homeless people bedded down for the night in doorways of businesses fronting the street.  This is America.

Until a few days ago, my brother, beset by his own demons, was homeless in Atlanta.  I talked with him by cell phone made available to him by a program for the homeless.  I urged him to get off the street, to get help from somebody, anybody.  He said he would.  Apparently he did, and I’m waiting to hear from him when he’s out of the hospital, or rehab, or wherever he has landed.

This is the sin of a society where executives of a failed global enterprise take home millions in “bonus” earnings, passing the victims of corporate greed and criminality in their BMWs and Mercedes-Benzs.  This is America.  This cannot, must not, should not continue to be the only America.

We who still have jobs, homes, cars, checking accounts, cell phones, computers, warm meals, a bathtub, dry socks, a toothbrush, a clean toilet, and who sleep peacefully at night, unafraid of being robbed, beaten, or killed — we must not let this continue.  We must act, give, pray, cry, organize, open our churches, do whatever it takes to care for those kicked down by a system not of their making.

Our shame should stalk us like death until we repent, reach out, and restore those who have been displaced.  This is America.  We are God’s people.  This must not stand.